Working closely with CLC, I’m working on designing the competition activities for the 2019-2020 Season in which teams of leadership students from across North America will compete in different regional competitions to demonstrate their leadership skills and abilities.

I am in charge of creating social media content, interacting with players and customers as well as forming connections with press and influencers. Going to conventions to demo our games as well as conduct business development is a highlight of my work!

Stephan’s Universe is a website I created to write reviews for movies and games as well as general pop culture news. It’s also where I like to interview other indie game developers about their games and approach to design.

I joined a team of designers under the leadership of renowned escape room designer Dr. Scott Nicholson to create the upcoming second season of the Red Bull Escape Room World Championship. I helped design the narrative of the game as well as develop prototypes for the various challenges players will take on in the final escape room.

I am in charge of maintaining our social media presence. I ensure that our articles are promoted and marketed effectively and students get can access our content on whatever platform they use. I also help create some of the video content we produce and write some articles for the site.

Leading a team of Game Design students we developed a game for the Canadian Public Health Association to help destigmatize STBBI’s (Sexually Transmitted Bloodborne Infections) among healthcare practitioners and workers.

Returning to Red Meat Games after working for them in the summer of 2016, I was in charge of their social media presence and promoting/marketing their upcoming video games. I helped build their community and effectively communicate with fans and potential players. I also attended various functions representing the studio and demoing the games, from CGX in Ottawa to Niagara Falls Comic-Con.

I started at Breakout Escapes before the opening of their Brantford location to design and develop their upcoming escape rooms. Working with a team of other game design students from Laurier we’re hard at work making sure that these upcoming rooms are engaging and above all that the puzzles and locks make sense with the setting and theme.

I’m also a game master at the company, making escape room bookings, greeting players and putting them into the games ensuring they have a great experience.

Under the supervision of Dr Emily Flynn-Jones, I worked both in the field and in the lab to collect data about a climate change game prototype we developed for the Ontario Ministry of Environment and Climate Change (OMECC). We wanted to see whether or not the prototype would successfully alter people’s attitudes and behaviours towards climate change both in the short term and the long term.

Working at Blot Interactive I got to do a lot of things. I did some quality assurance of Blot’s various mobile games, I wrote for Blot’s blog but most exciting of all I attended Gamescom 2017 and was privy various business meetings with Norma Rossler, CEO, CFO and WBENC member. I learned a great deal about business development in the video game industry, how large trade shows work and how to pitch a game to publishers. I attended meetings with Bandai Namco, 6waves, the Canada Media Fund and many other notable game organizations and publishers.

I worked with a team of students from schools across Ontario to develop a game for the Ontario Ministry of the Environment and Climate Change. Our goal was to show the player the various ways they can reduce their emissions in different aspects of their lives.

As the project manager, I was responsible for coordinating the various parts of the team (art, programming and designers) as well as overseeing the design document (ensuring it’s up-to-date, understood by the team, etc.). To read more about our project check out an article Laurier wrote on their site. 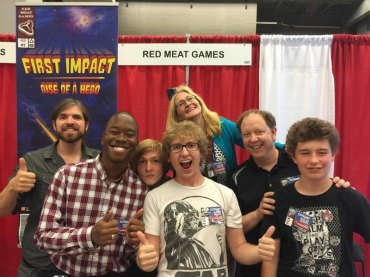 I wore many hats at Red Meat Games, as you must in indie development. I was initially hired as the Social Media Coordinator and was responsible for managing the company’s social media presence and creating content to showcase our games on YouTube and Twitch. I grew our YouTube audience almost 300% in my short time there. I wrote various blog posts detailing our studio’s goings-on and wrote articles on many topics from VR to mobile. I also demoed our games at conventions across North America, from Montréal Comic-Con to PAX Prime.

I branched out and began doing quality assurance on the studio’s PC and VR titles, executing test plans as well as documenting and reporting bugs.

As a staff writer at the Sputnik, I wrote bi-weekly for the Arts & Culture section. I researched and interviewed my own stories and submitted articles that were edited and published. You can read my articles here.

As a host at Radio Laurier I record and edit a weekly radio show called “Press to Start to BGN” from the BGN Lab (Brantford Games Network). On this show, myself and some other GDD students discuss and comment on the latest and greatest in the games industry, from news to releases to anything we’re really passionate about. We air every Wednesday on radiolaurier.com and you can check out all the recaps of our past shows here.